What to do with a leaking clinker? 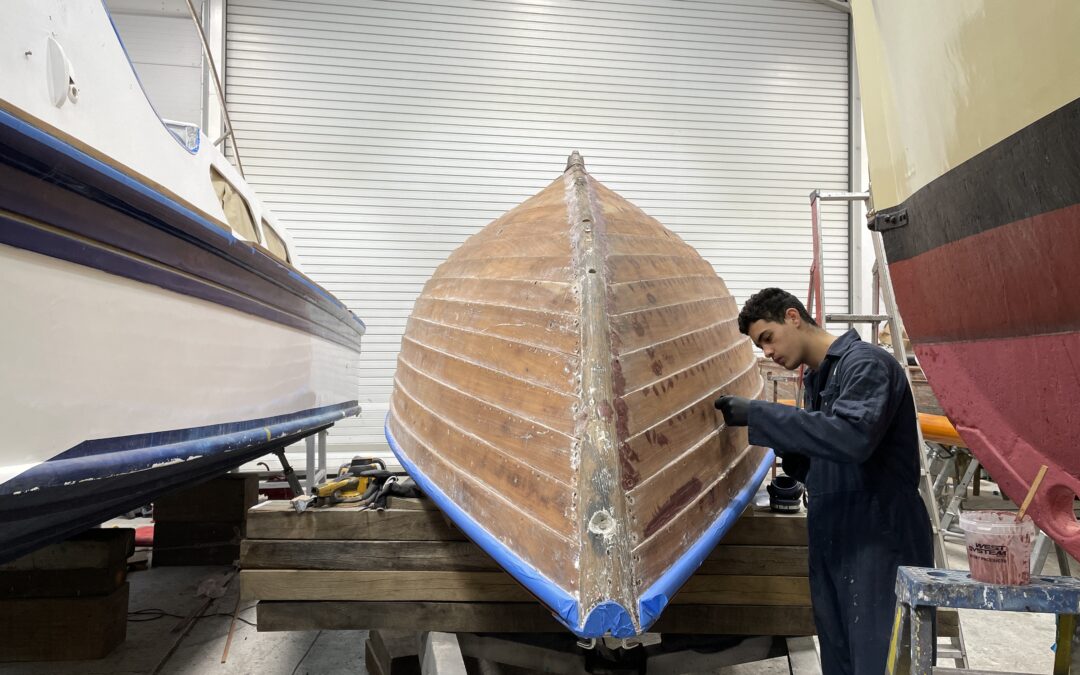 As many classic boat enthusiasts will tell you, ownership of a wooden yacht is a labour of love.  The strength of this loving relationship is really put to the test when an owner of a leaking clinker-built boat is faced with the decision on what to do next.

To some, the idea of adding a layer of epoxy to a wooden hull is akin to blasphemy and the more traditional, time-consuming route of refastening each plank is preferable.  To others, sheathing a clinker yacht has the potential to transform a compromised hull into a watertight boat that is preserved for years to come.

SYH Managing Director Jonathan Dyke commented, “The approach to a leaking clinker hull is not one size fits all.  It very much depends on the condition of the yacht, budget, time and how the yacht is used on the water, be it racing or cruising.  We work closely with an owner to deliver the most effective solution for each yacht.”

Jonathan Dyke continued: “Any restoration of a clinker yacht, will be a significant investment relative to the value of the boat.  Therefore, they do lend themselves well to sheathing.  It would be rare to sheath a carvel-built yacht, as the plank lines are accessible and can therefore be repaired in a variety of ways including less significant refastening methods.”

Built by Tucker Brown in 1959, Suffolk-based Stella Timoa was rescued and restored by her owner, Andrew Gilmour. Since her restoration, Timoa has been enjoyed as a competitive racing yacht and a family cruiser.

After struggling to take up water at the start of the season last year and relying on a pump system to keep her afloat, Timoa suffered a near-fatal blow and she very nearly sank.

Andrew Gilmour commented, “It became clear that something had to be done to safeguard Timoa for the future.  After lengthy discussions with the team at SYH and input from Wessex Resins, we made the decision to sheath her.”

SYH worked with Andrew to prepare Timoa for sheathing.  SYH removed the engine and deck fittings, whilst Andrew stripped the paint off the hull (around 60hrs work) and sanded the planks.  Once Timoa was rolled over at SYH, she was left to dry out.

SYH Boatyard Services Director Joshua Major commented, “Sheathing requires care and precision.  The drying out process shouldn’t be rushed otherwise you risk water ingress in the planking, which can cause rot once the hull has been sheathed as it effectively locks in the water.”

Joshua continued, “You also have to be very precise about the specification of the laminates, which are determined by the boat’s structure, to make sure the hull is completely waterproof.”

Timoa’s plank seams were cleaned and filled to remove any grit and ensure a smooth surface for the laminates.  Once the resin and laminates were applied meticulously by SYH’s team, the hull was left to cure.  The final stages involve fairing the hull before polishing to achieve a smooth finish.

Andrew continued, “Sheathing has been a controversial technique for the preservation of wooden boats, so I have agonised over it for some time. Being my father’s old Stella, she will never leave the family so sheathing will make her easier to look after in the future. The only alternative would have been a complete refastening, which would have been much more costly. I am hoping this method will preserve not only Timoa but many more classic boats for the future.”

With Timoa now ready to go back in the water, SYH has started work on sheathing a second Suffolk Stella named Acamar.