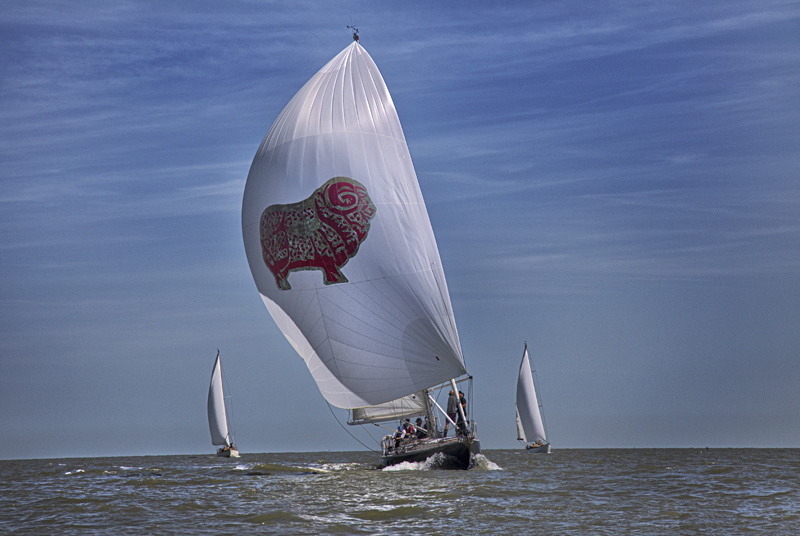 With the smell of bacon sandwiches in the air, skippers and crews gathered for briefing on Saturday morning to be welcomed by SYH managing director Jonathan Dyke. Race officer Peter Martin outlined the dos (do stay out of the shipping channel) and don’ts (don’t go in the shipping channel!) before the yachts cast their lines for the day’s racing.

After a postponed start to allow all the yachts to get out to the line (including Stealaway who had an unfortunate engine failure on the way out), the slow, Stella and fast classes all set off in 5-7 knots without a hitch.

With the tide now flooding and the wind shifting out of the east / south east, the yachts negotiated oncoming currents on their way upwind to Foxes.  Rounding the mark to starboard and hoisting spinnakers as they went, the fleet reached down to a shortened course finish line at Stone Banks.

After a leisurely lunch in glorious Suffolk sunshine for the faster yachts, and a rather quicker pit-stop for the slow class, afternoon racing commenced in 15 knots of wind. From a Stone Banks start, it was a beat up to Mark X to port followed by a reach across to Foxes.  Rounding the mark to port, spinnakers were hoisted, and a course set for Penny Hole.

After some debate on the radio, the race committee confirmed a starboard mark rounding to keep things interesting!  Spinnakers were dropped on the approach and the yachts made a 270 degree turn of Penny Hole before heading up and tacking round onto a reach down to Stone Banks.  From there, it was champagne sailing under spinnaker all the way to the finish at the Beacon Hill line.

Upon its return to SYH, the fleet was greeted by music from local musician Peter Hepworth drifting across the sunny harbour.  Haven Ports Yacht Club lightship was bathed in afternoon sunshine as crews gathered for socialising and the usual post-racing analysis in the bar and on the dockside.

New for this year’s regatta was Frog on the Dog’s converted horse box serving wood-fired oven pizzas, which were a popular choice for a tasty snack or an early dinner. As always, the lightship was buzzing with camaraderie, with live blues coming from the top deck all evening.

Day one finished with clear front runners in each class with Whisper (fast class), Timoa (Stella) and Zest (slow class) all taking two class wins from two races. With more wind promised for day two and a competitive fleet, it certainly wasn’t a foregone conclusion ahead of the final race.

Day two began with light wind out of the east / north east and the three classes set off on time from the Beacon Hill line against the tide down to Stone Banks.  A few yachts could be seen making the most of the tight reach and flying spinnakers and code zeros in an effort to get ahead on the long leg down to the mark.

By the time the fleet had hardened up around Foxes to port, the sun was out and the breeze had kicked in (evidenced by the amount of spray soaking certain foredeck crews!).  The increase in wind made for some close, tightly fought racing at the top of each class.  The race was on.

Bearing away around Foxes, spinnakers were hoisted en route to Penny Hole.  Rounding the mark to starboard, the fleet headed upwind to Outer Ridge, avoiding the channel on the leg home to the Beacon Hill line.

Once the fleet returned to the harbour, yachts were packed up and drinks ordered at the lightship whilst crews waited for the final results and the regatta prize-giving.

International One Design Whisper has been nipping at the heels of SYH Classic Regatta winners for the past few years and it was finally her time to shine.  Displaying some clever sailing and pointing higher than most could ever hope for, Mark Wincer and crew won the fast class and the overall regatta trophy.  The Stella class was won by Andrew Gilmour in Timoa and Tumlare Zest, helmed by Jonathan Thompson, took the slow class.

The Spirit Yachts ‘In need of a stiff drink prize’ (which also came with a RigCare voucher from sponsor Evolution Rigging) was awarded to the Bangor S Class Stealaway for her aforementioned engine failure.  Honouring the regatta tradition to celebrate ownership of classic yachts as well as racing, the Safir trophy for the most beautifully maintained yacht was won by the 12 tonne Gauntlet Grey Seal.

SYH managing director Jonathan Dyke commented, “With ten new boats this year, it’s clear the regatta is still a popular choice in the classic racing calendar. Fantastic weather and great camaraderie, with some healthy competition on the water, all made for a great weekend. We look forward to welcoming entrants back next year!”

Jonathan continued, “A big thanks must go to Peter Martin and the race office team, as well as the regatta’s sponsors OneSails and Evolution Rigging for their ongoing support.”

See below gallery showcasing a selection of images from the regatta. If you would like a high resolution copy of an image or if you would like images of a particular yacht, please email helen@oceanpr.co.uk.