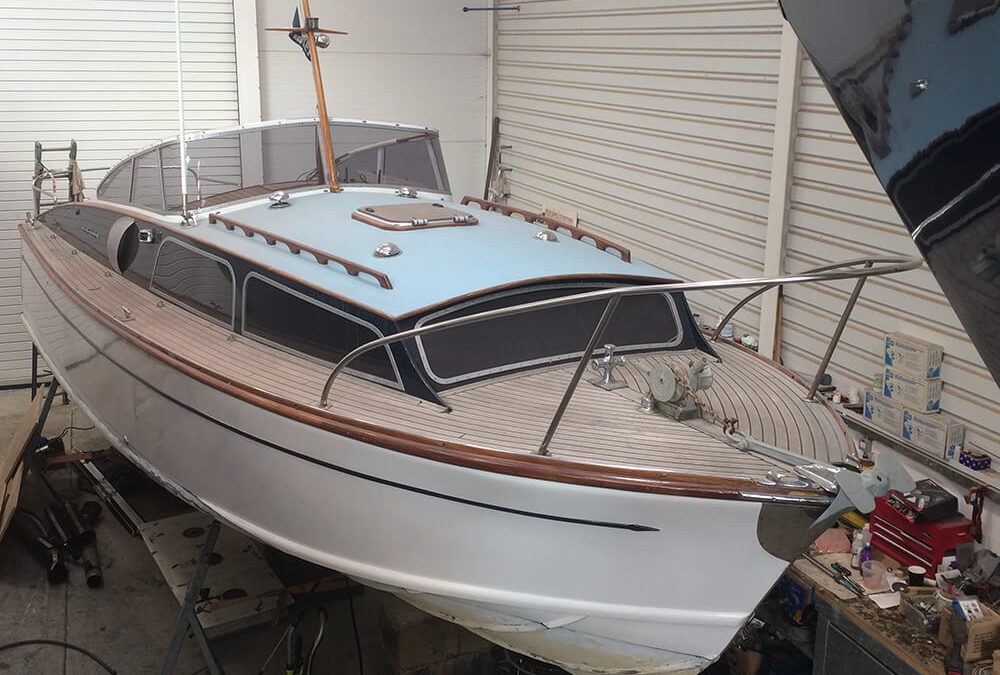 Turning back the clock on two Fairey Huntsman 28s.

SYH is drawing on traditional boat building techniques to restore two Fairey Huntsman 28s true to their original design. Before we delve into the detail on the projects, it is interesting to note the history behind these sporty power boats.

Fairey Marine was borne out of Fairey Aviation, which made aircraft in the Hamble from the early 1900s to the 1950s. After World War II, knowledge and techniques used on aircraft were transferred to building sailing dinghies, which led to the creation of Fairey Marine in 1946.

In the 1960s, Fairey Marine branched out into wooden-hulled power boats (including the Fairey Huntsman, designed by Alan Burnard), which became renowned for their longevity, resistance to rot and stability. Thanks to its ‘V’ shaped hull with single chine, Fairey Huntsman boats enjoyed considerable success power boat racing in
the 1960s.

The early sail and motor boats were constructed out of Agba (a mahogany) using the double diagonal strip planking construction and hot moulding techniques. The hot moulding process was an adaptation of the method originally developed for wooden aircraft production, which used double diagonal layers of thin timber secured with glue and baked in a large oven called an autoclave (see black and white image).

Back to present day and hull number 101, Flower Power, is in the SYH workshops to undergo hull repairs and have a new deck laid. Hull number 69, Nauti Bear, is having considerably more work done…

SYH boatyard services director, Joshua Major, explained: “We began by blasting the old antifouling off with a soft mineral called olivine before we revolted the underwater section of the hull and replaced the port spray rail. Once this is complete her top sides will be repainted in Awlgrip.

“We have modified the exhaust back to its traditional design and our onsite partner French Marine is re-engineering the engines (twin Perkins 200hp), which have been re-placed midships under the cockpit. We will also be replacing the diesel tanks.”

Joshua continued: “We have stayed true to Fairey’s original design and construction, whilst ensuring the boat’s performance will be optimised.”

The SYH classic restoration ‘one stop shop’ is once again in operation with onsite business Seapower Marine Electronics booked to fit a new wiring loom and dash panel.

If your boat is in need of a refit, renovation or damage repair, contact SYH boat yard services director Joshua Major: joshua@syharbour.co.uk or 01473 659240.