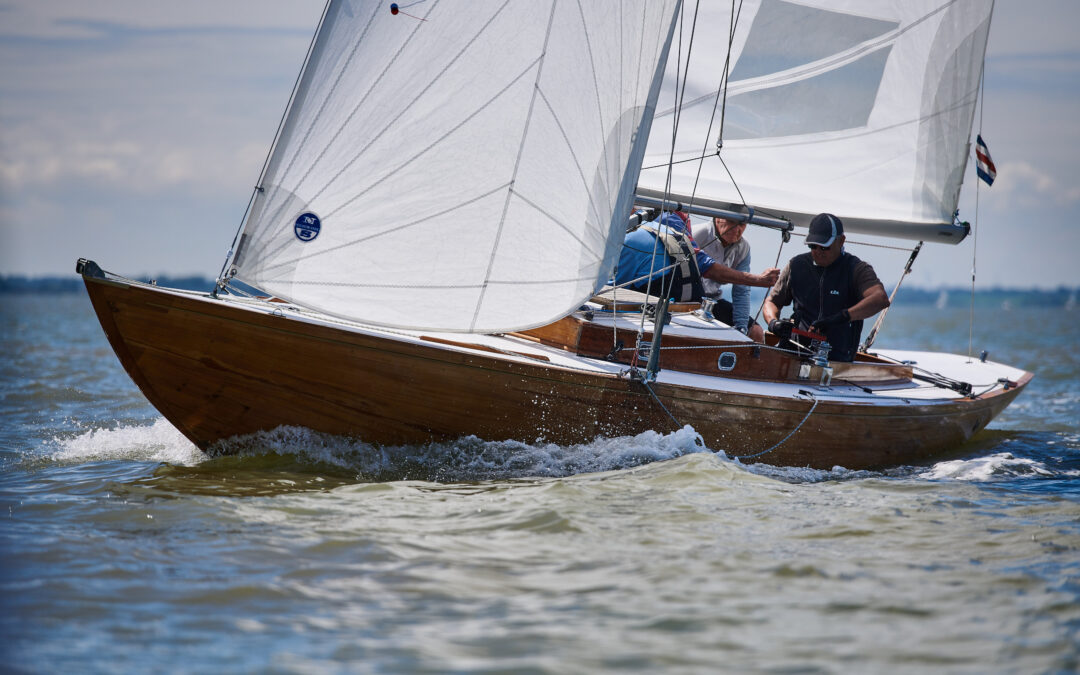 Beautifully maintained classic sail and motor yachts gathered at Suffolk Yacht Harbour at the end of June ahead of a wet and not so windy race on the Friday evening. The weather may have been damp, but the mood was jovial with everyone simply happy to be back enjoying the atmosphere of a regatta.

Saturday morning broke in a blaze of sunshine. After bacon sandwiches ashore and staggered, Covid-secure briefings, the yachts headed out to the start line in the estuary of the River Orwell.

The Slow, Stella and Fast classes all set off on time for race one, which soon had to be abandoned due to the lack of wind and strong tide pushing several of the fleet back towards the start line.

Having received reports of more wind further out in Dovercourt Bay, the race committee moved the start line and set a course for the second race. More suncream was applied and picnics were eaten in the sunshine, whilst the fleet re-set ahead of the staggered Slow, Stella and Fast class starts.

A gentle upwind leg in the glistening sunshine preceded a port rounding of Stone Banks, where some yachts hoisted their spinnakers for the reach across to Outer Ridge. Upon rounding Outer Ridge, the fleet was a spectacle of brightly coloured spinnakers cruising downwind to Pye End. At the mark, spinnakers were dropped ahead of the upwind leg and the start of a second lap in glorious summer sunshine.

Meanwhile, the classic motorboats were putting on a show of their own, with a parade of power across Dovercourt Bay from a standing, committee boat start. It’s not often you see five Fairey Huntsman 28s and a Fairey Christina cruising in company; it was reminiscent of a certain 1960s James Bond film.

Upon arriving back at Suffolk Yacht Harbour, entrants were greeted with complimentary cold beers and gin and tonics delivered direct to their boats, and they settled in to relax and listen to the live music playing out across the harbour. Some chose to kick back in their cockpits, whilst others tucked into the takeaway wood-fired oven pizzas, and others dined onboard Haven Ports Yacht club lightship.

As the evening wore on, the sun went down, and live jazz filtered its way over the water as people enjoyed some much-needed camaraderie.

Sunday was a very different story. Racing began for all three classes in 18knots from the north-east, but it had to be abandoned after over half the fleet retired due to the challenging choppy seas and (by now) gusts of 22-25knots.

Back at the harbour, drinks were poured, and lunch served whilst entrants waited for the Covid-secure prize-giving. With only one race from the series to go from, the slow class was won by the Tumlare Zest, Andrew Gilmour in Timoa took the Stella class and Mark Wincer’s International One Design Whisper won the fast class.

A well-sailed and beautiful boat, Whisper also retains the overall regatta winner trophy from her triumph in 2019.

The Spirit Yachts “in need of a stiff drink” prize went to the Kim-Holman designed sloop Shaker, who unfortunately didn’t hear Sunday’s race abandonment announcements and persevered to gallantly sail the whole course.

A regatta newcomer, the elegant International One Design Mitzi, won the Safir Concours d’Elegance trophy and Tumlare Zest won the ‘Windpower’ trophy for the highest finishing boat without an engine.

This year was the first time classic motorboats were invited to join the event and the Fairey Marine trophy was awarded to Fairey Hunstman Europa II.

SYH Managing Director Jonathan Dyke commented, “It was fantastic to see so many beautifully maintained boats gather at Suffolk Yacht Harbour. After the challenging times we have all endured recently, the overwhelming feeling was that everyone was simply happy to be back onboard their boats, back out on the water and enjoying the buzz of a regatta once again.”

Keep an eye on www.syhclassicregatta.co.uk and the Suffolk Yacht Harbour Facebook and Instagram pages for dates for next year’s regatta.